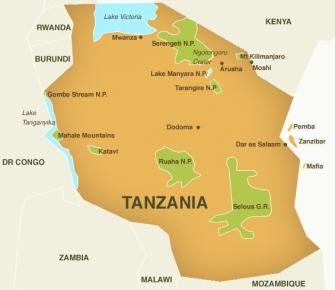 Tanzania can be roughly divided into the northern and southern part. Parks in the Northern Circuit are Tarangire, Lake Manyara, Serengeti, Mount Kilimanjaro and the Ngorongoro Crater.

In the Southern Circuit you will find the more remote and less visited parks like Selous (as large as the Netherlands), Katavi and Ruaha. These parks are special because apart from game drives in jeeps, you get to do game walks or spot wildlife from a boat in rivers. In the Southern Circuit, night game drives are also a popular activity. We often use small planes to reach these remote parks.

In the Western part of Tanzania you will find Lake Tanganyika, one of the deepest lakes in the world, far away from civilization. On its paradise-like beaches you will believe yourself to be on the coast of the Indian Ocean. Canoeing, fishing and snorkeling are popular activities in this area.

Lake Tanganyika is also the starting point for hikes in the mountains. Partly due to the projects of Jane Goodall , this is one of the few areas in Africa where chimpanzees can still be found.

Apart from the impressive and untouched wildlife parks and the highest mountain in Africa – Mount Kilimanjaro – you can enjoy the tropical white beaches of Zanzibar, Pemba and Mafia. The Indian Ocean offers ideal water sports options such as, snorkeling, diving, dolphin trips and more. Wild Times has some special selected lodges and hotels on offer. Beautifully appointed boutique hotels or authentic beach hotels overlooking the turquoise sea, excellent cuisine and tropical climate ensure a safari in Tanzania is a once in a lifetime experience.

Tanzania is one of the most popular safari destinations. Tanzania has a friendly population, vast and pristine parks, an incredible diversity of wildlife and accommodation ranging from small authentic camps to luxurious private camps.

Wild Times specializes in organizing tailor-made safaris. Guided by your ideas and preferences we create an itinerary that suits you and your travel companions best! To give you an idea of the possibilities you will find some example safaris below, though it goes without saying that organizing tailor-made safaris is what we do best. Call us for advice or request a safari proposal here.

“We’ve had a fantastic safari in Tanzania. We visited Tarangire National Park, Ngorongoro crater, the Serengeti and Zanzibar Stone Town. We stayed at amazing safari lodges  (rooms with a view) and saw not only the big 5, the ugly 5 but many more animals. We’ve been so very lucky to have seen the migration! Really unforgettable. Zanzibar was a fairy-tale after the safari. Everything was well organised, our driver/guide very friendly and professional. We have gotten to know the Tanzanians as people with a good sense of humour that are very hospitable. In short: our expectations were surpassed!”

Tanzania has a great variety of National Parks and reserves, each with different ecosystems and wildlife species. Below are descriptions of some of them. Please let us know what safari

and beach destinations you wish to include on your safari The degree of success of your safari relies on the election of accommodation and the order of the parks. That is our strength, so email or call us for advice or a personal travel plan.

Safaris are available in all shapes and sizes. We would like you to enjoy an authentic safari experience. Therefore, our preference goes to small-scale accommodation and game drives in open Land Cruisers or Land Rovers. Apart from great itineraries, it is also possible to include the following activities to your safari.

We strive to offer our customers small-scale lodges and camps. A beautiful safari often depends on the right choice and order of accmmodation. Wild Times designs itineraries based on authenic and remote lodges between 3* and 5* ratings. Because of our long-term relationships with African partners our prices are equal or lower priced compared to the prices you could arrange directly. Because we have visited all the lodges and camps we offer, we know which ones suit your needs best within each price category. Below you will find a small selection of our African accommodation.

Subscribe to our newsletter and receive inspirational travel news 4-6 per year.

WILD TIMES IS AFFILIATED WITH